George, portrayed by John Heard, is a main character in the first film, Sharknado.

George is an old friend of Fin's who spends all his time drinking at Fin's bar.

During the sharknado in Los Angeles Geogre accompanied Fin's group, using a stool as a weapon. However, after saving people with the rest of the group on a flooded highway, a shark appeared and devoured him.

George reappears in Fin's bar in the new timeline at the end of The Last Sharknado: It’s About Time. George complains about Fin selling the bar as it won't leave him anyplace to drink anymore. While discussing how he's been seeing everyone's faces "day after day, year after year," Fin glances at George who just laughs. As everyone rushes April to the hospital, George grabs his stool and follows them. 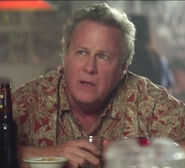 Add a photo to this gallery
Retrieved from "https://sharknado.fandom.com/wiki/George?oldid=1184"
Community content is available under CC-BY-SA unless otherwise noted.